Photos: Daniel Curiel & Get Some Photo

For long-time fans of the UTV industry, names like Wes Miller carry a lot of history. Wes cut his teeth racing ATVs and riding/filming freestyle with his company H-Bomb Films, which produced the awesome “Huevos” film series. He began racing UTVs as far back as 2005, but it wasn’t until 2015 when Wes and Polaris crossed paths. Fast forward to 2017, and the Polaris Factory Racing Bomb Squad RZR XP Turbo started lining up for races with Wes behind the wheel.

For more than 30 years, Wes and his Bomb Squad crew have been racking up race wins and championship titles. To date, Wes holds 5 SCORE Off-Road championships and is a multi-time winner of the famed Baja 100, 500, and Tijuana Desert Challenge. Most recently, Wes and his crew secured a big win at the 2020 Baja 1000, taking home the win in the Pro Turbo class by over 40 minutes and securing the overall win in the UTV category. 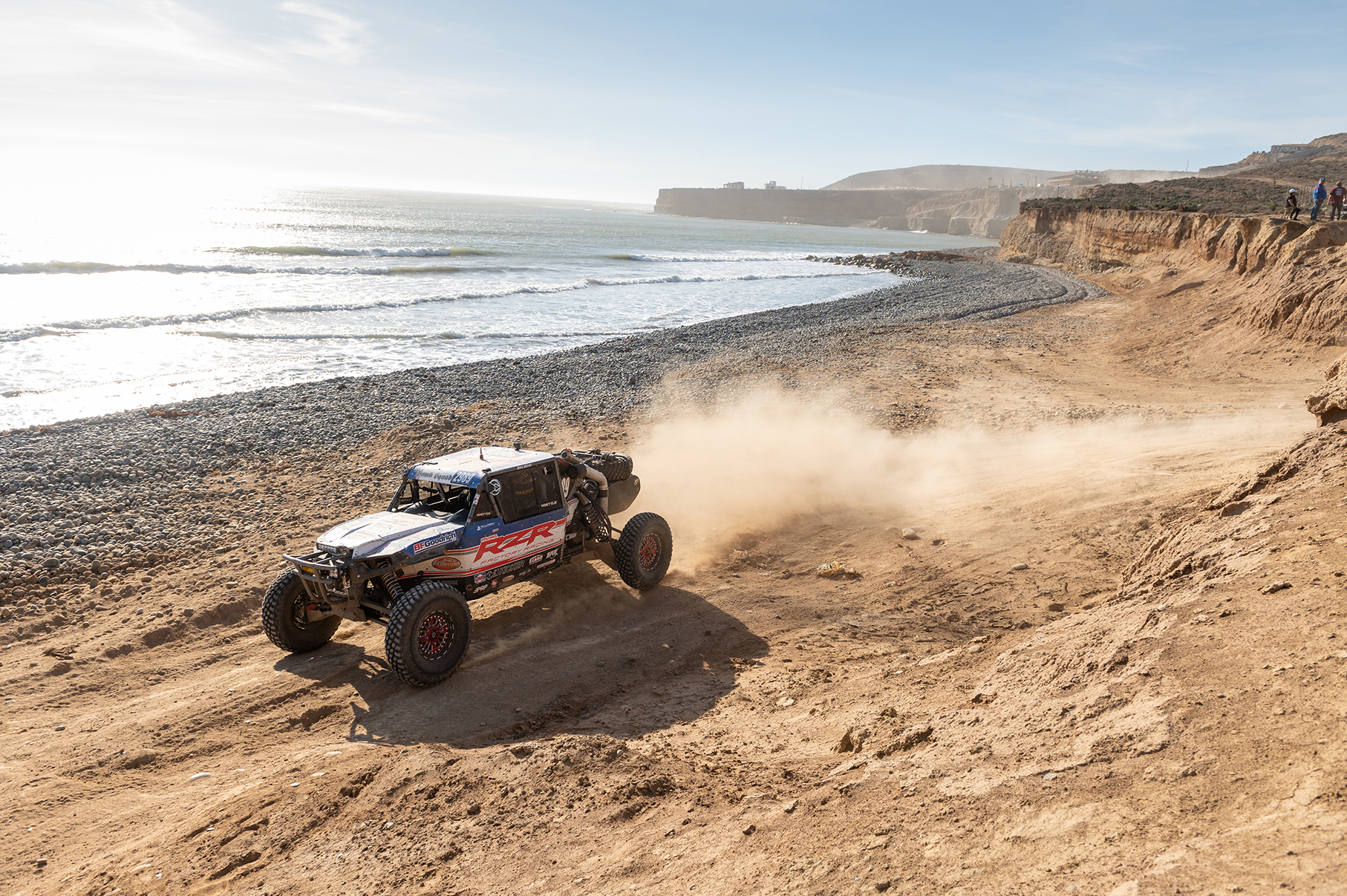 We caught up with Wes for a dive into his Polaris Factory Racing machine and put together a build list. While there are some items on the build sheet that cannot be priced, a lot of what the #2989 car runs down in Baja can be purchased by any average consumer. Racing Baja is expensive, even in the UTV class- a car of this caliber can cost well over six figures to build. Racing is beneficial for the average consumer even if they don’t partake themselves, as it leads to increased R&D from OEM manufacturers and aftermarket parts companies alike. Stronger machines mean more time on the trail and less time on the trailer!

The Polaris Factory Racing/Bomb Squad Polaris RZR XP Turbo is powered by a Cross Motorsports-built variant of the RZR Pro XP engine and transmission, which feature Polaris’ latest technology. The turbocharger is stock, but the engine has been enhanced with upgraded internals ready for the rigors of racing Baja. The car’s chassis is custom-built by the crew at Rhys Millen Racing, and the rest of the build sheet reads like a dream shopping cart on your favorite UTV parts site. Buckle in for a ride with this insane RZR as we take you through the highlights of this amazing machine! 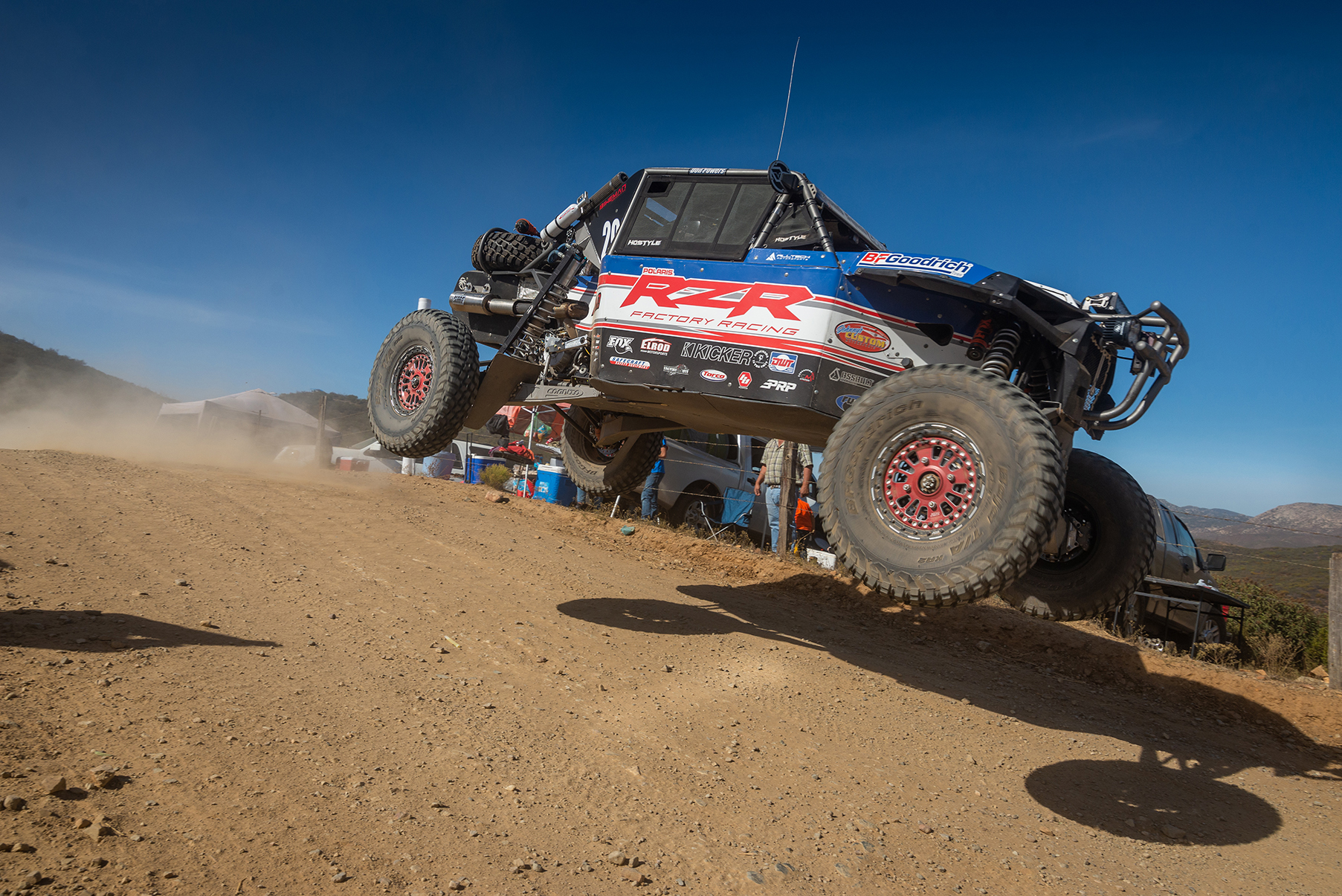 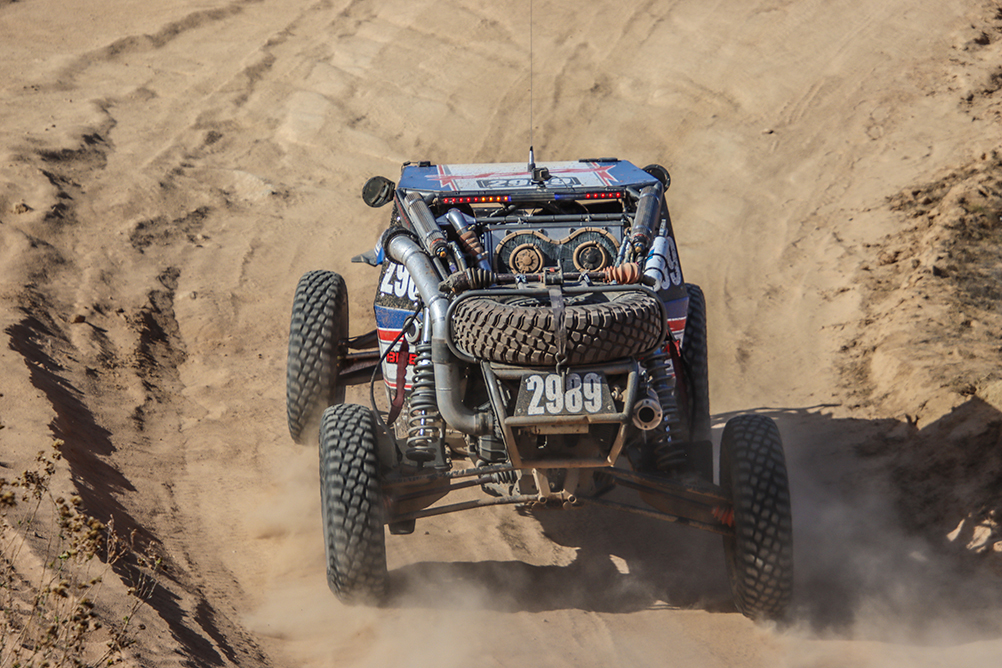 That massive silver intake tube that runs up behind the driver’s window is not for the engine, but rather for the CVT intake. Wes and his team route the transmission’s intake tube up and out of the path of roost and silt in order to keep the CVT operating as intended for the duration of the race.

Nighttime visibility is of the utmost importance in Baja, and it proved so during Wes’s 26-hour run to first place at the 2020 Baja 1000. Baja Designs provides the lighting on this RZR, utilizing a pair of 9,500 lumen XL 80 lights behind the front push bar. Baja’s XL lighting range is designed to give the wide-beam performance of an LED light combined with the focused long-range performance of an HID light. Surprisingly, they’re only $399 each! 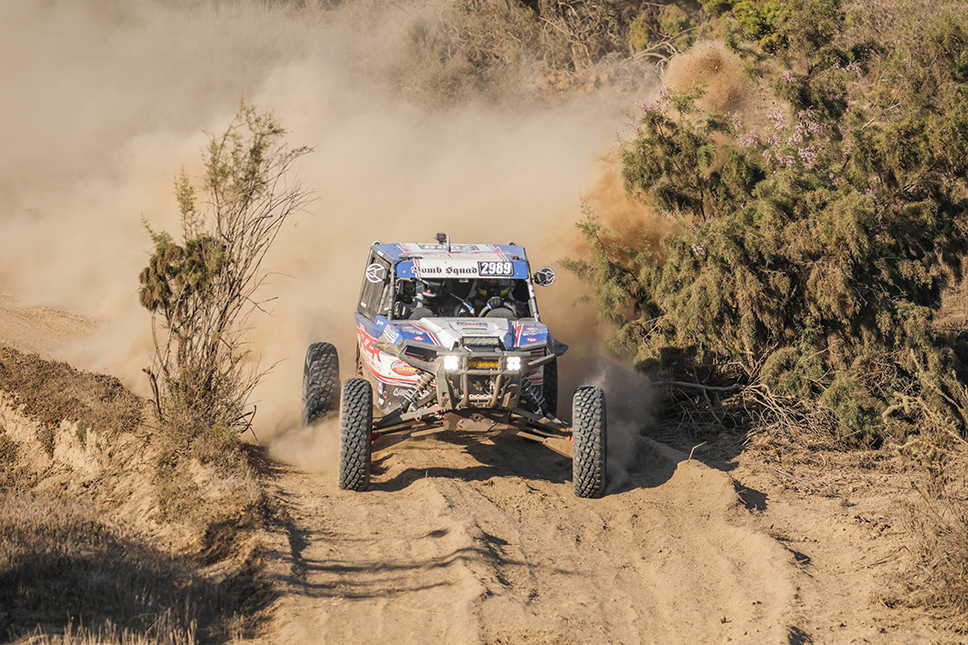 The Bomb Squad RZR utilizes Madigan Motorsports front A-arms and uprights, paired with Cognito Motorsports trailing arms and radius rods. A UTV Inc swaybar keeps the body roll in check, and massive Fox Racing Shox tuned by All Tech Motorsports smooth out the bumps. This team is out here proving that usually, the best results come from collaboration. 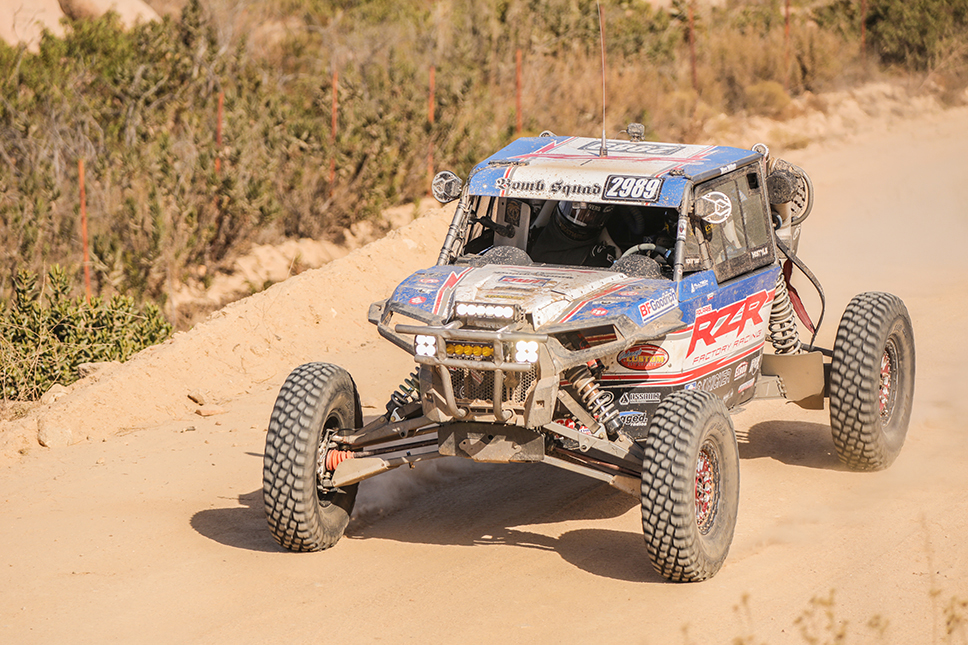 This team trusts RCV Performance with their axle needs, and for good reason. RCV builds some of the strongest driveline parts in the world, and they stand behind their products. You can always tell an RCV axle by its signature orange CV boots. Note that this race RZR also has PRP limit straps bolted to all four corners- this saves shock internals from taking damage during harsh top-out situations when the suspension is fully extended.

There are many parts on this RZR that you can’t see that contribute greatly to its performance and durability. A custom Motec ECU tuned by Johnny’s Custom Motorsports powers the RZR, while SandCraft RCR driveline components like a built front differential, billet carrier bearing, upgraded drive shaft and motor mounts keep the RZR from ending up on the DNF list. 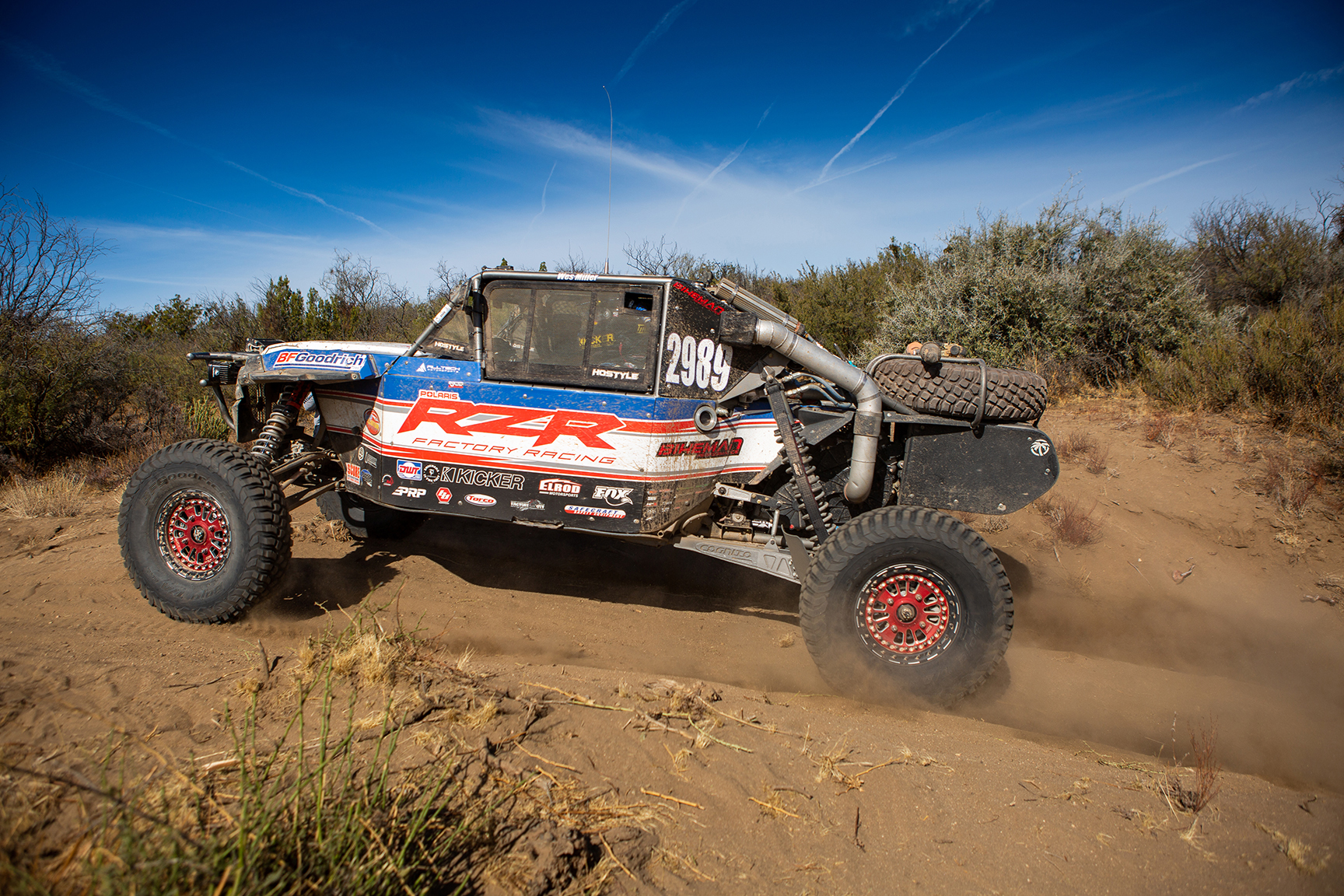 Safety is a big concern in all types of racing. A set of PRP racing seats and 5 point harnesses keep occupants tied down, while Hostyle Racing custom window nets ensure that nothing comes in or out of the side windows in the event of a mishap. The car’s vitals need protection, too, which is why you will see custom rock guards and sheetmetal paneling covering most of the RZR’s guts.

Wes and his team were the first to cross the line in the Pro Turbo UTV class at the 2020 Baja 1000, locking in the 8th consecutive Baja 1000 win for Polaris Factory Racing.